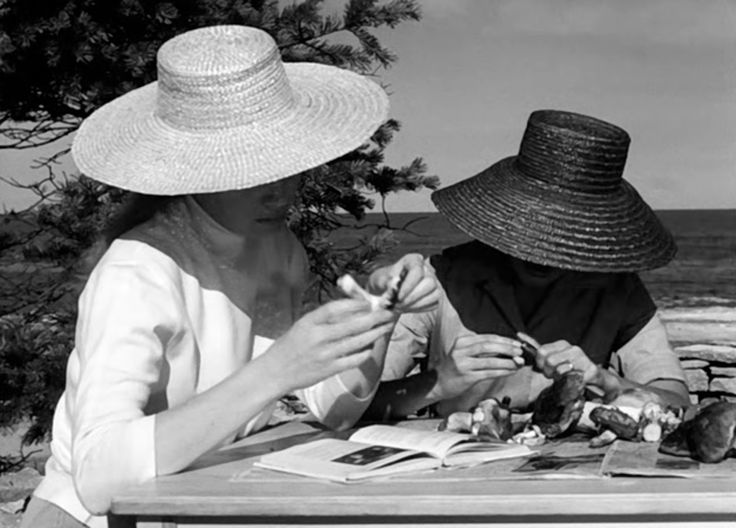 I think I could turn myself into you. If I made a real effort. I mean inside.
You could turn yourself into me just like that.

There are three distinct possibilities for defining the frame of Ingmar Bergman’s Persona (1966). First, to accept it at face value: Elisabet is an actress who refuses to speak, and Alma is the nurse who cares for her. Second, that the film is a dream: either Elisabet’s son dreams of his mother, or Alma dreams of someone who listens to her, or Elisabet dreams of someone who knows how to take care of others. Third, that Alma and Elisabet are the same woman – that woman experiencing a split personality, an existential crisis, a loss of purpose, or all three.

Although, as an art film, Persona is open to interpretation, its title seems to indicate a clue. In the school of psychology originated by Carl Jung, the persona is “a kind of mask, designed on the one hand to make a definite impression upon others, and on the other to conceal the true nature of the individual.”(1) It is a specific part of the unconscious, and it is important to keep it separate from the individual’s sense of self, lest the individual become dissatisfied with the persona as an insufficient representation of the self.(2) The persona shares the unconscious with two other figures: the animus or anima (an archetype identified as the masculine traits of a woman, or the feminine of a man), and the shadow aspect.

The shadow is the instinctive, irrational archetype that sums up all aspects of self that the individual does not recognize in him- or herself – a literary foil. It often makes its first appearance in dreams, as a figure of the same gender as the individual,(3) and contains the negative or unacknowledged traits of both the individual and the society in which the individual lives.(4) Sister Alma fulfills this Jungian archetype almost to the letter: she exemplifies many traits Elisabet feels herself lacking (such as the maternal instinct and the ability to disclose her own emotions), asks her questions about the nature of conscience and the expectations of society, and confesses an inner exhibitionism.(5)

Viewed in this psychological light, a new reading of the film comes forward: a combination of the previous ideas. Elisabet, or the woman associating herself with the character called Elisabet, is an actress with an unsteady perception of herself. Fed by the dissociative experience of constantly moving from one role to another, her persona has grown to the point that it masks her actual self. When she realizes this, she shuts down because she is afraid to strip away her persona or to let it further consume her. According to psychologist Marie-Louis von Franz, “every personification of the unconscious […] can bring life-giving development and creativeness to the personality, or they can cause petrification and physical death.”(6) In the midst of this crisis of self, Elisabet’s shadow aspect makes its debut: Alma, sensible, unafraid, and ready to save her from her overburdened persona.(7)

To carry a film about archetypes and ideas, however, a director needs personalities. Bergman cast Ullman and Andersson due to their remarkable facial similarity, as well as prior acting credits.(8) In certain scenes, it is hard to tell which character is onscreen until the other arrives for comparison, which further supports the reading of the film as psychological allegory. He also provided the film with a classical “info-dump” beginning, in which Sister Alma, as the newcomer and thus the audience surrogate, must be given the details of Elisabet’s condition. This immediately made Alma sympathetic, by placing her at the same level as the audience, and thus as Alma comes to love Elisabet, the audience follows suit. If Persona were bound by the rules of classical Hollywood narrative, Alma would be the protagonist. At best, Elisabet would be her deuteragonist; at worst, her antagonist.(9)

Having caught the audience’s attention with a straightforward story setup, Bergman lets his leading ladies slip into the plot or journey of an art film. According to Bordwell, the narrative art-film is “a trip, an idyll, a search, the making of a film, (… or) the biography of an individual, in which events become pared down towards a picaresque successivity.”(10) In short order, Elisabet and Alma go from a search for Elisabet’s cure to a seaside idyll to an undoubtedly picaresque biography.

Both as a matter of narrative and as the shadow making itself known for the first time, Alma carries the weight of the film’s dialogue. Aside from brief appearances by a nurse, Elisabet’s husband, a single line by an unexpected narrator, and four lines by Elisabet herself, Alma says every line in the film. Elisabet’s lines always represent a change of direction in her personal journey – her first maternal outreach (telling Alma to go to bed), her betrayal and reversion back to persona (the letter), her first display of emotion in front of another person (the pot of water), or her acceptance of her shadow (repeating “nothing” after Alma).(11) Elisabet triggers the beginning of the film by realizing that her self, being only persona, is lacking; she finishes it by giving her shadow its place to make her self whole.

Alma has a clearer goal than Elisabet, both psychologically and in the narrative. As a nurse, she wants to heal Elisabet; as Elisabet’s shadow, she wants to make herself known and make Elisabet accept her as part of herself. This is presented as a love story (falling outside the four usual categories of love) with its associated nonverbal cues of laughter, smiles, humming, weeping, stroking hair, hugs, touches, all of which make the story more accessible to the audience. Alma follows the Jungian steps of individuation in her quest for acceptance: the encounter, the merging, and the assimilation.(12)

As has been stated before, Alma appears to Elisabet when her persona is no longer a sufficient self. Dr. Peter Homans has written that “’the breakdown of the persona constitutes the typical Jungian moment both in therapy and in development”(13). After the encounter, Elisabet at first allows her persona and her shadow to exist side-by-side, until her shadow starts to present her with unfamiliar and threatening uncertainties about her perceptions of love and self. As her persona is threatened, it reasserts itself by pushing the shadow away with emotional detachment (letting Alma read the letter dismissing her as a “study”).(14) The shadow responds by becoming more aggressive, triggering a merge.

When a shadow merges with a persona, it causes a period of indecision and moral frailty, during which the shadow may temporarily take control in a Jekyll-and-Hyde fashion.(15) This is shown in Alma’s sudden outburst of anger and her desire to hurt Elisabet with the water, rather than healing as she has tried to do during the first half of the film. Elisabet reacts by admitting the shadow and acknowledging Alma’s power.

To leave it there, however, would be to leave Elisabet overpowered by her shadow and unable to properly face the world again in any reasonable way. Alma-as-shadow begins to mimic the behaviors of Elisabet-as-persona: pulling away, keeping silent, showing Elisabet that the shadow can be used by the persona as a valuable tool. At the same time, Elisabet begins to adopt some behaviors of Alma’s: she sets out a lamp to wait for Alma to come in, and openly expresses emotion over her son for the first time.

The scene with Elisabet’s husband and the torn photo shows the depth of their merging and the beginning of the assimilation process.(16) Elisabet accepts Alma as a part of her self, and shows it by allowing Alma to take her place in her husband’s bed. Then, when Alma sees the picture, she pulls at Elisabet, drawing her out with her words, bringing her to a place where she can acknowledge her emotions without thought of playing a part. Elisabet begins to slip fully into her shadow aspect, glad to be open and understood, and Alma’s face is blended with hers.

Alma, however, rejects the power Elisabet offers her. Elisabet must have her persona, or her soul will “stick out everywhere”. The struggle for balance is played out back at the hospital – Alma-as-shadow cold and hard like Elisabet’s old persona, Elisabet-as-persona now strong and perceptive with the addition of her shadow aspect. She allows Alma to take the lead in their last interactions as separate beings, and then assimilates and abandons her: Alma fades out of the story, leaving change behind her like Mary Poppins, while Elisabet returns to the theater – stronger and saner, with both a persona-mask and something worth holding behind it.

You could turn yourself into me just like that.
Although your soul would much be too big. It would stick out everywhere!