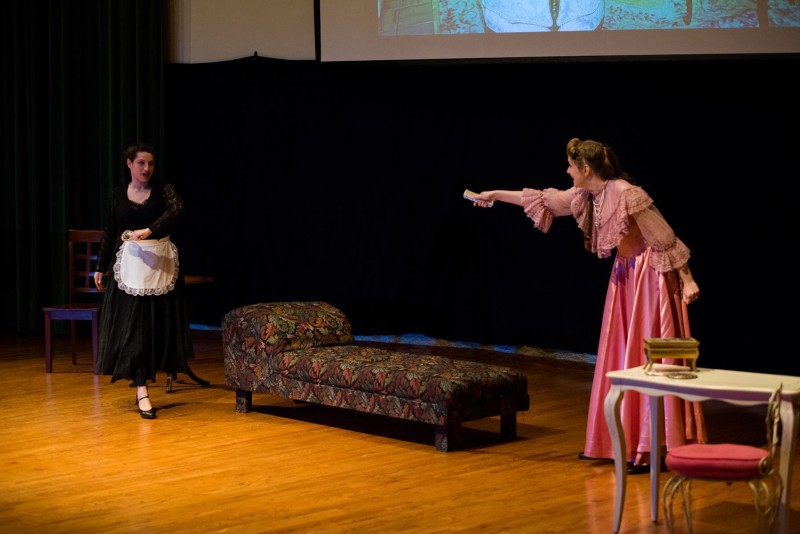 Rachael Bernstein as Petra and Ali Peterkort as Anne in A Little Night Music, UT Dallas 2015. Photo by Peter Wynne.

The cast was lively, exciting, and delightful to watch. They navigated not just Sondheim’s music but also the acting with energy and skill. Every character seemed crucial to the story, to the point that identifying any one character as the star was impossible. Even the servants without lines, who I had assumed were background roles and costumed set crew, brought their own comically improvised subplots. The racy scenes were pulled off tastefully, and with more focus on the characters than on the lewdness. (There isn’t a lot you can do to keep things family-friendly when the script itself isn’t, but I have a feeling very few other people in the audience were actually the tiniest bit shocked. Even I was less shocked than I had expected to be.)

One of the most wonderful aspects was watching the performers I knew from smaller roles in Best of Broadway VII. Ali Peterkort, Melania Amaya, and Aaron Waters were three I had seen mainly as ensemble, but in their larger roles they shone. I expected to dislike Anne Egerman as a childish, simple character, but Peterkort made her innocence endearing, and I found myself hoping that as Anne seemed repulsed by sex and Henrik not very good at it, they might end up being very happy together. Amaya’s Fredrika was frank and wise like Alice in Wonderland, possibly the only character onstage who had any clue to the meaning of life despite being the youngest.  And while Fredrik Egerman is hardly an interesting enough figure to believably have three women after him, Waters kept him from being a completely boring hinge on the love triangles. It was not any of them, nor the elegantly cynical Mme. Armfeldt, nor the scornful and ageless Desiree, or even Countess Charlotte’s sarcastic despair that trapped my interest, though. It was Petra.

As the only sane (or at least non-dysfunctional) person in the Egerman household, Petra acts as a foil to the rest of the family for the first act and the whole cast for the second. She does her work with a smirk and a flash, pushes Henrik far out of his comfort zone instead of ignoring him, and teases Anne with surprising gentleness. In a world of characters pretending to care, pretending not to love, pretending to know what’s happening, Petra is brash and unapologetic and happy. She has no awkward attachments or uncomfortable pretenses. Her liasons are straightforward and cheerful and fun, with none of the secrecy or delicate maneuvering that makes up the main plot. No other developed character achieves this: Petra stands in contrast to the entire rest of the cast. Even her solo is very different from the other songs. While most of the music is full of counterpoint and soliloquy and conversational back-and-forth, “The Miller’s Son” sounds like an Appalachian folksong. It is minor, earthy, low, familiar. Petra does not complain to the audience, or move the plot along, or reflect on her past. She simply sings, seemingly for the fun of singing, or to highlight the uncomplicated comfortable openness of her life. The song feels as natural and ordinary as she is. It takes an accomplished actress to be so utterly open, and Bernstein delivers.

In the small setting of the performance hall, quick-sung lines sometimes had too much echo to be understood. Once or twice the tenors strained to hit their higher notes. The number “Liasons”, although well-performed, seemed oddly placed in the show (was Mme. Armfeldt actually at Desiree’s “digs”, while Desiree and Fredrik rekindled their romance in the next room?).

Aside from that, even the smallest aspects of the performance were enchanting. The Liebeslieders, with their in-and-out relation to the main story, were fascinatingly mysterious: who are they, and what are they to each other? The clashes and interactions between the three generations of Armfeldt women felt real and familial: you could see Madame in Desiree and Desiree in Fredrika and Fredrika in Desiree. The set changes themselves were a delightful thread of silent comedy featuring a clumsy footman – all completely improvised, I later learned, to cover up that a set piece had almost been dropped during the first change. The costumes were beyond fantastic. Overall, the production shows growth and development in the UTD musical theatre department. It was a sophisticated show and everyone involved pulled it off beautifully.